Prior to falling ill two years ago and finally receiving a Crohn’s disease diagnosis in December 2019, 33-year-old Kolby Noble,

of Maryland, never knew how much her strong faith would help her through the ups and downs of chronic illness. As a wife, mom of three, and an educator, Kolby shares a heartfelt, eye-opening piece that beautifully captures how faith correlates to the daily battles we face as people with IBD.

Picture it. Jesus had left His disciples in their boat on the sea so that He could spend some time alone. It wasn’t long before a powerful storm developed. Jesus returns to the disciples, walking on the water through the wind and the waves, but they don’t recognize Him and are afraid. Jesus speaks to them, saying, “Take heart; it is I. Do not be afraid”. (Matthew 14:7) 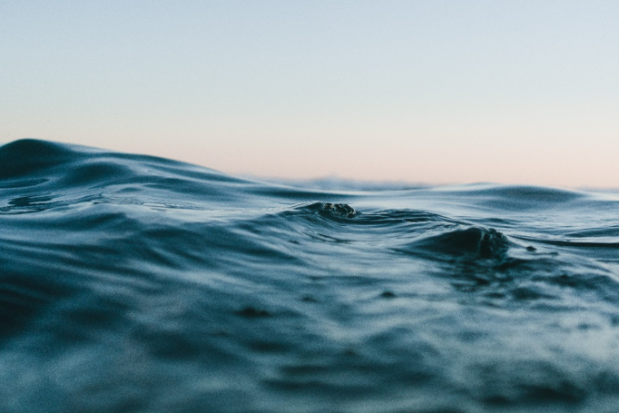 I’ve always been in awe of the ocean. As a child I used to play in the waves of the Atlantic or stare into its horizon and I always felt so small in comparison. I would often wonder how the same God that made the ocean, so vast and wide and deep, would create me, too. How could the same God who told the waves to dance along the shore love and know me so intimately? My life has been much like the ocean. Much of it has been beautiful and calm. But like the disciples and everyone else there have been storms, too. Somehow it’s always through the wind and the waves of those storms that I hear Jesus call to me.

It’s been two years since I first thought something was wrong with my health. For two years the wind and the waves have strengthened until, like the disciples, I found myself in the midst of a powerful storm. 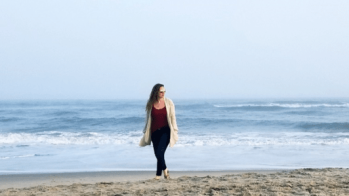 I was as sick as I’d ever been in my life, and couldn’t figure out why I wasn’t getting better. In December 2019, I received confirmation that I had Crohn’s Disease.  I was afraid. But through the wind and the waves, I heard Him say “Take heart; it is I. Do not be afraid.”

Back in the boat with Jesus that day was a man named Peter. Peter saw Jesus on the water and when Jesus called to Peter to step out of the boat and come to Him, Peter didn’t hesitate. In the midst of the storm Peter climbed out of the boat and started walking to his Savior.

Soon, though, Peter took his eyes off of Jesus and focused instead on the wind and the waves and began to sink. He cried out “Lord, save me!” (Matthew 14:30) and Jesus instantly reached out His hand to catch Peter. When He pulled Peter from the water Jesus simply asked “Why did you doubt?” They returned to the boat and the wind and waves cease.

Much like Peter, I knew Jesus before the storm of Crohn’s Disease developed. I had witnessed His miracles in my life, just as Peter had before the storm arose on the sea that day. When I received my Crohn’s disease  diagnosis, I heard Jesus tell me not to be afraid. As I stepped out to meet Him in the storm for comfort it wasn’t long before I took my eyes off of Him and focused instead on the wind and the waves. It’s easy to focus on feeling sick, being in pain, being too exhausted to get up each day, or not having the energy to take care of your family. I was taking medication multiple times a day just to function, to somehow get through each work each day.

I found myself focusing on all the tests and doctor’s appointments I had to go to, and the infusions I’ll have to take for the rest of my life to maintain any sense of health I used to know. I focused on the unpredictability that is Crohn’s, and not on the predictable, steadfast love that can only be found in our Savior.

God doesn’t promise those that believe smooth seas or calm waters. He never says that life is going to be easy. He actually tells us just the opposite. Isaiah 43:2 says “When you go through deep waters, I will be with you.” What a comfort to know that in the midst of our storms we can look out and find a Savior. God knew before I ever took a breath I would have to fight this disease. He knew that it would be hard, and painful, and exhausting. But He loves me, and He is with me, and it’s because of Him that I can face the storm. You can, too.

If you have just been diagnosed with a form of IBD, I encourage you not to focus on the wind or the waves. Focus instead on a Savior who is ready to reach out and catch you when you start to sink. Don’t doubt His love for you. Don’t doubt that He will be with you through the storm. Instead, listen for the voice that says “Take heart, it is I; do not be afraid”. For mightier than the waves of the sea is His love for you. (Psalm 93:4)

7 thoughts on “Finding faith through the storm that is IBD”