Biologic drugs have the ability to give many of us in the IBD community a chance to live a much fuller, and well-rounded life. But there are trade-offs, especially when it comes to our immunity and the ability to fight off infections. As a mom of a 2-year-old and 6-month-old whose been on Humira for more than 11 years, I’m extremely cognizant of protecting my kids from sickness to not only protect them, but myself. I often feel as though people may think I’m over the top with worrying about illness in my household, but quite honestly, unless you or someone you love is immune compromised, it can be a difficult concept to grasp.

She’s a 38-year-old wife and mom who juggles two autoimmune diseases. She also has Hashimoto’s disease. Since she started on Remicade in 2018 following her IBD diagnosis, she’s experienced the difficulty of  warding off illness while being an elementary school teacher and a mom to a young child.

“Shoes off, hands washed!”  My son knows the routine by heart. Every time we come into the house, shoes come off and hands get washed. I like to think that all of my years spent worrying about germs when I didn’t need to be, were fantastic training for when I actually needed to be concerned.

When I was diagnosed with IBD, I was hesitant to get on a biologic because of my fear of being immunosuppressed. I’m an elementary school teacher and when I started on Remicade infusions, my son was only six. I basically spend my day in a Petri dish.

Dealing with the symptoms of IBD was more than enough–how on Earth would I be able to handle that plus avoid picking up viruses at school and in public?

Taking steps to be proactive

After I got sick on the second day of school last fall, I decided that washing my hands frequently wasn’t going to cut it. I have always been a frequent hand washer, especially at school, but I needed more protection. At first, I was nervous about how others would perceive me. There were a lot of confused looks by coworkers and students when I would politely decline to use someone else’s pen. I started carrying a pen with me everywhere to ensure I wouldn’t have to use a communal pen. Now people know that I always have “my” pen with me and that I don’t share it with others.

Another thing I’m very careful about is touching door handles and knobs, especially the door to the main office. The main office is where you can find the school’s health room, where every sick kid passes through. I either wait for someone else to come and open the door, or I use a barrier such as a paper towel to open it and then wash my hands right away.

I never touch my face and I keep my phone in a plastic bag (quart size bags work great!) so that I keep school germs at school. Kids are definitely puzzled by that last one, but I explain that I need to keep germs away as much as possible, and if I need to touch my phone then my phone gets the germs on it so I protect it with a plastic bag.

Worrying less what others thought and making my needs a priority

I really needed to stop caring about what others think and prioritize my health. One of the most surprising things to me was that people really don’t understand what immunosuppression means. Some people think I’m just a paranoid germaphobe even after I’ve explained that I’m immunosuppressed. They don’t understand that a simple cold for them, can mean days of sick leave for me due to a secondary infection. Or a fun day swimming in the bay can mean a bacterial infection for me that lasts for weeks and causes symptoms similar to a bad flare.

Yes, it is mentally exhausting to worry about immunosuppression on top of all the other things chronic illness brings. Plus being a teacher. Plus being a mom.

As much as I hate getting sick, the worst part for me is missing out on doing fun things with my son.

Somehow my body knows when we have something fun planned and chooses those times to conk out on me. When I’m lying on the couch at home feeling sorry for myself while my husband and son are at a friend’s New Year’s Eve party or Memorial Day BBQ (both events I missed this year), I try to remind myself that Remicade is what allows me to lead a relatively normal life and be able to do things like go sledding with my son on a snow day and take him Trick or Treating. I couldn’t do those things when I was in a bad flare before treatment and definitely can appreciate them more now. I just make sure shoes come off and hands are washed right when we get home.

I had just gotten off the stage after speaking at the Crohn’s and Colitis Foundation Patient Symposium Event in October. Her and her mom, Michelle, approached me outside of the auditorium. Tears in their eyes. Smiles on their faces. I immediately felt a connection and knew this little girl was something special.

Madison was only three years old when she started experiencing symptoms. Bloody diarrhea was the first indicator. After E.coli and C-diff were ruled out by doctors, this little girl underwent a colonoscopy. Imagine that. Three years old. Drinking the prep. Dealing with everything in the bathroom. And not being able to understand why this was happening or knowing what was wrong with you. Being a little girl, naïve to what it means to have a chronic disease that would be a part of her, for her entire life.

Imagine how overwhelming it felt for her parents. Michelle said it felt like they were torturing their daughter. Madison is now 12 years old.

She’s had a total of three colonoscopies, an endoscopy and an MRE. She’s been hospitalized due to flare ups three times. She has three siblings at home, so as she’s in the hospital or going to the doctor, her parents have to care for them as well. There’s a reason for the saying—’it takes a village’… because it really does.

Madison has indeterminate colitis. Her inflammation is centered around her colon. She also battles arthritis that is secondary to her IBD. Just like me, Madison is on Humira injections. Her parents give her the shot—and each time she gets anxious and upset before and after. As a 34-year-old grown woman, I still react the same way at times. So, I can only begin to think what it would feel like for her. Aside from Humira, Madison takes Sulfasalazine, Imuran, Vitamin D, Iron and a multivitamin.

When it comes to advice for fellow parents, Michelle says, “Try to connect with other parents who are going through the same thing. There are “support groups” on Facebook that have helped me so much. Do not give up hope. I have every reason in the world to believe that Madison is going to accomplish everything that she sets out to. This disease is only one part of the amazing person that she is. It does not define her.

Also, as a parent of a child with a chronic illness, we are their best advocate. No one knows your child better than you do. If you think that something isn’t quite right, trust your momma instincts!”

When you talk to Madison she radiates strength and resilience. You can see it in her eyes. She’s very mature and well spoken. She says IBD has made her a stronger person. “It’s made me more responsible in the sense of taking my medication, thinking about what foods affect me and always telling my mom if anything is wrong.”

As far as her Humira injection routine (let’s be honest, we all have one!)…her parents take the pen out of the fridge and let it warm up for a few hours, to lessen the sting. Madison likes to use Pinterest on her phone as a distraction. She wipes her leg with the alcohol swab and nods at either her mom or dad so they know to start.

Right before the shot, she relaxes her leg, takes a deep breath and pretends she’s anywhere but the living room couch.

Each summer, Madison attends Camp Oasis. It’s a unique experience where kids with IBD have the chance to be on their own, to make decisions and to take responsibility, while being in a safe and compassionate environment. All the campers have IBD. “Camp has really showed me that I am not alone battling this disease. It is the coolest thing to be surrounded by other kids who know and understand what I have experienced.”

Madison doesn’t let her disease hold her down. She’s an avid soccer, basketball and volleyball player. She’s gearing up to take the stage in “Annie” and she excels at dance. This girl does it all. 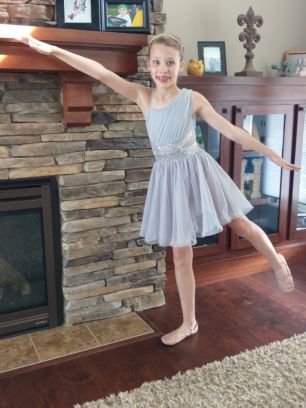 Guess what she wants to be when she grows up? A Pediatric Gastroenterologist. Madison wants to help kids who are going through what she’s gone through. 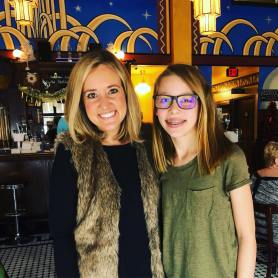 Out to lunch with Madi, taking on IBD together one day at a time.

I can without a doubt say, I know she’ll achieve this goal and follow her dream. She’s a true example of an IBD hero. Someone who hasn’t allowed her disease to rule her life. Someone who looks adversity in the face and says ‘not so fast.’ Someone who I admire and look up to, even though she’s more than 20 years younger than me. If you ever need inspiration—think about Madison during that next Humira shot, think about her when you’re taking that dreadful colonoscopy prep, think of her when you’re getting rolled down to that next CT scan. I know I will.