Today I will give myself my 236th Humira injection. This past week marked nine years since I began giving myself the biologic drug to help manage and control my Crohn’s disease. Ironically, this past week I also had the opportunity to give two speeches in Chicago about my patient journey and what it’s like to be on Humira.

During my speeches, I explained why I chose the injections vs. getting an IV infusion of a different biologic. I chose Humira because at the time I was a morning news anchor and I was private about my disease battle.

I didn’t want to be sitting in a public place, hooked up to an IV in front of my viewers for hours at a time. I also chose Humira because of the convenience and the ability to give myself the medication in the comfort of my home. It’s a discreet way of treating my disease. A plain Styrofoam cooler box arrives to my doorstep, I put the injection pens right in the fridge and every other Monday night I go through the motions of administering the injection.

During the question and answer portion a man in the crowd asked me a question that perplexed me a bit…and still has me thinking. I had explained how painful the injection was, how the medication feels like liquid fire running through your leg for those 10 seconds you need to hold it in. It’s not like a typical vaccination or shot you receive at the doctor’s office.

Humira sets the bar for me when it comes to pain. To give you an idea I thought my Humira was wayyy more painful than my epidural and spinal block before my scheduled C-section.

Knowing that—he wondered if God forbid my son was ever diagnosed with inflammatory bowel disease if I would prefer for him to go with Humira or one of the IV infusion drugs. I paused for a moment…the thought hadn’t even crossed my mind yet. It made me wince even thinking about my son having to endure such pain.

I told him if it was necessary I would much rather have my kids do the Humira injections, because rather than having to go to a hospital or doctor’s office and sit amongst others who are battling illnesses, I would be able to sit on the couch next to them and we could do our shots together. 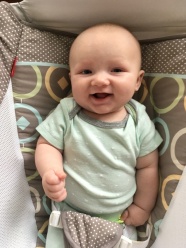 After the question and answer portion a young lady came up to me…she was probably about 20 years old. She said her mom has battled an auto immune disease her entire life and that she’s always been her hero and that I’ll be the same for my son. Another audience member took the elevator with me during the break. He told me that when he was 13 years old, his dad was diagnosed with Crohn’s disease and that he’d been in tears throughout my entire speech.

Having the chance to hear from young adults and people who are familiar with what inflammatory bowel disease does to loved ones once again provided great perspective. It gave me newfound hope that whatever flare ups or hiccups I have with my disease journey as a mom, will only make my children stronger.

One thought on “The power of sharing: Managing Crohn’s with Humira”