Living with roommates. Having to use public bathrooms. Feeling fatigued and unable to keep up with the energy levels of your peers to study and socialize. While living with IBD while being a college student is difficult in the classroom, many may argue the struggles are even worse outside of academics. Socially, college is a time to explore, learn, and spread your wings. But, when you’re taking on an unpredictable and painful chronic illness, making plans to attend a house party on a Friday night becomes a bit more complicated.

Annie Tremain was diagnosed with Crohn’s disease her senior year of high school, so navigating the disease while starting college was a stressful whirlwind.

She was nervous about the potential of being matched up with a roommate who wasn’t a good match.

Using a public bathroom can be adjustment for any college student, let alone someone battling IBD. Elizabeth Haney 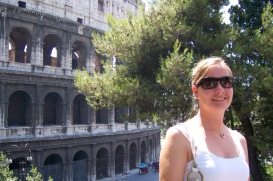 was diagnosed with ulcerative colitis less than one week before leaving to study abroad for three months. She says the fact the trip still happened and was so successful was a highlight of her college career. While back on campus in the States, she recalls how stressful it was prepping for colonoscopies.

“Prepping for a colonoscopy while you live in a house with three people but only have one bathroom was horrible. My mom would get me a hotel room for prep night when she could swing it financially.”

Rachel Wigell was only fourteen

when she became sick with IBD, so she barely had time to form a body image that didn’t include this disease. She says she was never somebody who was confident in her appearance, but having IBD didn’t help. From the prednisone “moon face” to issues with gas and continence, there have been lots of times where she felt too gross to be taken seriously.

“One trouble I had was plain old insecurity. Living in a dorm and sharing a bathroom with 20 other women isn’t fun when you’re having diarrhea multiple times a day. I was desperate to hide how “gross” I was from other women, which meant I didn’t have a support system.”

For Sydney Mouton, being immune compromised

caused her to get sick all the time and the community bathrooms weren’t of much help.

“I was in the middle of my worst flare in college, so I had a lot of issues from medication side effects that were more difficult to deal with while in school and trying to have a social life.”

Couple the stress of the living situation with the fatigue that’s brought on from the disease and it can be incredibly challenging. So many students living with IBD have shared with me the difficulty of wanting to be “normal” and like everybody else but then having to deal with the extreme health consequences that generally result from a “fun” night out.

Sarah Kate struggled with handling the unknown of the disease, while trying to help her friends understand her situation.

“Not knowing when I am going to feel well and having to explain to friends and them not really understanding why I felt well yesterday and why I’m not well today.”

Tips for students to calm the social stress

Be candid with your friends and open about your situation. The more you communicate, the better educated those around you will be. If people show lack of compassion or disinterest, that tells you right off the bat that their friendship is not worth your time and effort. Seek out friends who have your back, genuinely. Rather than downplaying your struggles and pain, paint a clear picture to those around you so they can support you and understand the nature of your experiences.

Give yourself plenty of time to get to and from class and social outings. Scout out the best places to have a safe, quiet rest. Pad your course schedule and extracurriculars so you don’t burn yourself out. Try to schedule your classes no earlier than 9 a.m. so you’re able to get plenty of rest each night.

Check out dorms on campus with private bathrooms. During my college experience, I lived in a quad my freshman year and lived with two roommates my sophomore year. I always had a private bathroom. Seek our dorms with these options available. The privacy and comfort will be invaluable.

Weigh the pros and the cons of a night out. If alcohol doesn’t agree with you, don’t push yourself just to try and fit in. You can still go out and have a great time and limit the amount of alcohol you ingest. It’s more fun to be hanging out with others and being sober than it is to be back at the dorm or in the hospital because you put your health in jeopardy.

If you’re struggling, don’t hesitate to reach out to the college counseling center on campus. As isolated and alone as you may feel in the moment, always know there is support available for you both near and far.

Click here for IBD on the College Campus: Getting the Medical Logistics in Check

Click here for IBD on the College Campus: The Challenge of Academics